When we were planning our trip to Casablanca, there was one other destination I knew we had to see. Famous for its cultural city life, gardens, and markets, Marrakech was amazingly overwhelming. A massive wall surrounded the city, with many entry ways named after ancient tribes that used to live in Morocco. The streets were busy, with vendors walking in between lanes trying to sell candy, drinks, flowers and souvenirs as cars whizzed by. Almost every building was a dark red or orange, built out of clay that towered over the many people who hustled through the city. I was so sad that we had just one day to see all the sites before having to return to Casablanca that night.

Our first stop was at the Jardin Majorelle, a memorial garden to the great Yves Saint Laurent. Jardin Majorelle took over 40 years to cultivate and was created/designed by French artist Jacques Majorelle. Jacques Majorelle had a contemporary villa built to be used as his art workshop in the mid 1900s on the grounds where the garden now rests. Surrounding his villa he created the mass garden that lays out over two and a half acres This beautiful garden is home to many different exotic plants and flowers. The details were incredible, from the maze of nature to the intricate artwork that was etched on the outside of the artists old villa. The garden consisted of shaded archways formed by various types of trees that then lead to flower filled meadows and dramatic ponds. It was an amazing balance between natural beauty and artwork.

The next stop on our bucket-list was the Djemaa- El-Fnaa (The Central Square) and the Marrakech Souk. The Square was something like I’d only seen in movies. Thousands of people roamed around the large, outdoor square, stopping to watch the (real) monkeys dance and the snake charmers “hypnotize” the live cobras. I was gutsy enough to hang out with two cute monkeys, but the cobras, not a chance! After we had seen enough of the street crowd, we made our way to the back of the square. It took us over thirty minutes to make it through the front of the Central Square to the back where the souk was.

The souk is a vast cluster of little shops run by native vendors that make up this enormous market. You can find anything and everything here, from a “Louis Vuitton” football to handmade jewelry, clothes, furniture, and artwork. There are a million little cobblestone streets and alleyways that lead to different categories of shops. First we visited the clothing and jewelry section. Although the clothing was not near as enticing as the millions of one of a kind rings, bracelets, earrings, and necklaces that caught my eye. I ended up with two rings, three bracelets, and one necklace, pretty good bargaining skills over here! Yes, the best thing about the market, you get to bargain. Lots of times these innocent appearing vendors try to rip you off by way over pricing their goods. For example, one ring that I wanted was originally $350 dollars, I guess I have good taste because it was one of the few things over $100 in the entire shop; I ended up getting it for around thirty U.S. dollars. Don’t worry, these scrappy vendors didn’t fool this little blonde!

After browsing the clothes and jewelry we made our way to the leather goods section. I swear, if I had any more room in my suitcase (it’s probably good I didn’t) I would have bought four different leather crossbody bags. Each shop had different specialties crossbody bags, fake designer bags, duffels, briefcases, and even “designer” sports equipment. Even though I obviously knew this was not real, I just had to buy this “Louis Vuitton” football (shhhh I’m not telling anyone)! 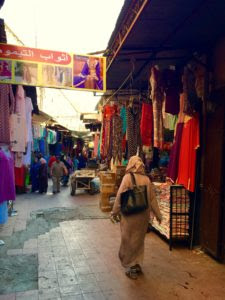 The next cluster of booths consists of furniture stores and blacksmiths. Although we didn’t spend much of our time in this section, I had the opportunity to see hand-made carpets, chandeliers, lamps, and vases. I even saw antique genie bottles, but I didn’t find any genies that were willing to grant my wishes! Our guide took us through the back alleyways, which were narrow and very dark. I was skeptical at first but then we came to another opening filled with tons of people working. Some were stringing beads to make jewelry, others were polishing leather and shoes. I asked our guide if this was part of the markets, and it actually was where all of the goods we saw in the shops were made. For as many people as I thought I saw in the souk, there were at least triple the amount before me. Not tourists, buyers, or sellers like out in the Central Square or souk, but all artists, focusing on creating their speciality. 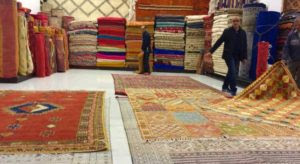 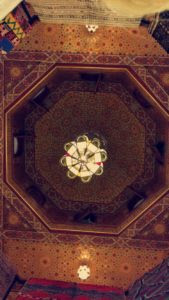 After leaving the market, we were exhausted. We walked around, negotiating prices, and taking all the culture in for almost five hours! So we decided to take a break on the patio of the Four Seasons Resort. The Four Seasons Marrakech was beautiful, classic Moroccan style. With the clay built building, white drapes and canopies, and colorful gardens, it was the perfect spot to relax before heading to our next stop, the casino.

Marrakech has a few casinos and one was right next to the Four Seasons in another resort. We decided to play a few hands of blackjack before dinner. What seemed like a short while later, when we were all finishing up our hands of blackjack, we went to cash in our chips so we could go to dinner before returning to Casablanca. When we walked outside and checked the time, it was midnight! We had been in the casino for hours. Since it was so late, we decided to head back to Casablanca and grab food on the way home. We pulled into the Four Seasons Casablanca driveway around three in the morning! What a long day, but so worth it. It was a once in a lifetime experience.